“We should be seeing fewer permits issued. That would be the natural result if we made oil companies pay for the true cost of doing business in California by putting up the money necessary to plug and clean up a well when they get a permit to drill one, as state law allows.”
– Liza Tucker, Consumer Watchdog

The Climate Center is part of the Last Chance Alliance, working to accelerate the phase-out of fossil fuels, which disproportionately harm lower-income communities. The Climate Center’s Climate-Safe California Platform includes guiding principles to protect frontline communities most affected by the extraction of fossil fuels and to ensure a just transition for workers.

A rapidly growing movement is underway in California to call out Governor Gavin Newsom for ramping up approval of fracking and drilling permits. This comes at a time when the effects of fossil fuel pollution on public health is of grave concern and many oil and gas companies may abandon leaky wells because of bankruptcy with falling demand for their products.

Over the July 4th holiday weekend Newsom’s oil and gas regulatory agency approved 12 new permits for Chevron to conduct fracking in the Lost Hills Oil Field in Kern County. Newsom has now granted a total of 48 fracking permits since ending his initial moratorium on the practice.

Newsom has also approved drilling permits for more than 1,400 new oil and gas wells so far this year. According to a California Council on Science and Technology report, it would cost more than $9.2 billion to properly plug California’s existing oil and gas wells, and operators have not set aside nearly enough money to pay for this legally required cleanup. Lower-income communities are disproportionately affected by exposure to pollution through proximity to these wells, making this a climate justice issue.

The federal government estimates that there are already more than three million abandoned oil and gas wells across the United States. Two million of those are unplugged, releasing the methane equivalent of the annual emissions from more than 1.5 million cars.

As oil and gas companies face bankruptcy, many fear that wells will be left leaking pollution, with cleanup costs left to taxpayers. At the same time, some of the top executives at these companies are granting themselves multi-million dollar bonuses just days before declaring bankruptcy.

Meanwhile, cities across the state see a way out of reliance on natural gas. The City of Berkeley banned new natural gas hookups in 2019, and now 30 California cities have policies that ban gas or at least encourage all-electric construction in some way.

San Francisco officials recently said that they are introducing legislation that would be similar to Berkeley’s ban, and Pacific Gas & Electric has also said it would support the growing push for state rules that require new buildings to be all-electric.

Clearly California communities are moving away from natural gas. So, why is Newsom increasing extraction permits and with it, taxpayer liability for leaky wells? 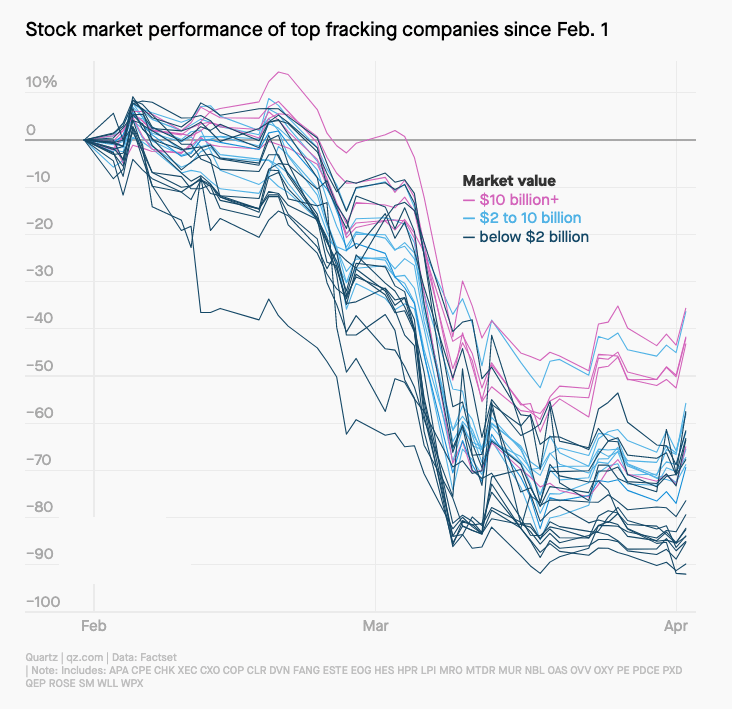 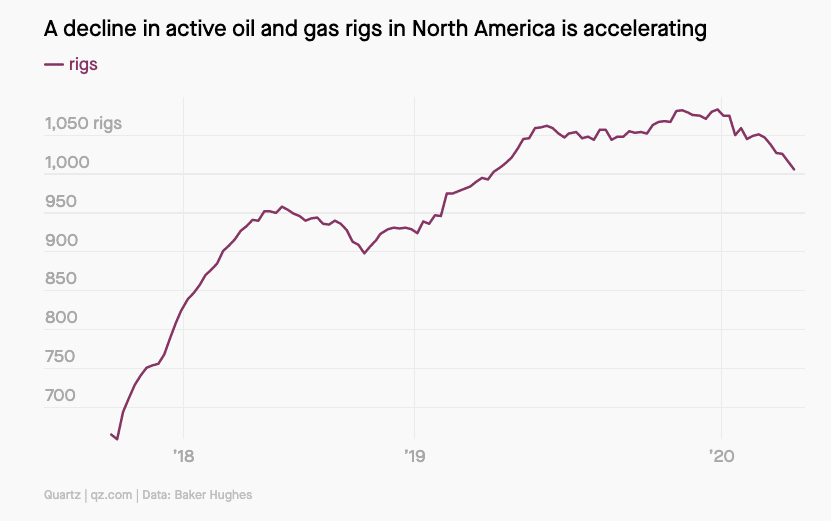 Fossil fuel divestment and the transition to 100% clean electricity a major step towards achieving the Climate Center’s Climate-Safe California Platform.

The Climate Center’s Climate-Safe California platform aims to secure a positive transition for workers and their families whose livelihoods depend on fossil fuel industries. Endorse the platform here.

Forty-two companies within the United States that have fracking based portfolios filed for bankruptcy in 2019:

With the cost of renewables in steep decline, The Climate Center has laid out a roadmap that leaves natural gas behind in favor of 100% renewables with a vast network of community microgrids for resilience. See our new policy roadmap for state legislators.

Some of the banks that helped fuel the fracking boom are beginning to question the industry’s fundamentals, as many shale wells produce less than companies forecast.

Banks have begun to tighten requirements on revolving lines of credit, an essential lifeline for smaller companies, as these institutions revise estimates on the value of some shale reserves held as collateral for loans to producers, according to people familiar with the matter.

The first satellite designed to continuously monitor the planet for methane leaks made a startling discovery last year: A little known gas-well accident at an Ohio fracking site was in fact one of the largest methane leaks ever recorded in the United States.

The findings by a Dutch-American team of scientists, published Monday in the Proceedings of the National Academy of Sciences, mark a step forward in using space technology to detect leaks of methane, a potent greenhouse gas that contributes to global warming, from oil and gas sites worldwide.

As environmental concerns drive power companies away from using coal, natural gas has emerged as the nation’s No. 1 power source. Plentiful and relatively inexpensive as a result of the nation’s fracking boom, it has been portrayed as a bridge to an era in which alternative energy would take primacy.

But technology and economics have carved a different, shorter pathway that has bypassed the broad need for some fossil-fuel plants. And that has put proponents of natural gas on the defensive.

Some utility companies have scrapped plans for new natural-gas plants in favor of wind and solar sources that have become cheaper and easier to install. Existing gas plants are being shut because their economics are no longer attractive. And regulators are increasingly challenging the plans of companies determined to move forward with new natural-gas plants.

“It’s a very different world that we’re arriving at very quickly,” said Robert McCullough, an energy consultant in Portland, Ore. “That wind farm can literally be put on a train and brought online within a year. It is moving so fast that even critics of the old path like myself have been taken by surprise.”

The shifting dynamics are being seen in the Western states in particular — driven not only by economics, but by regulation and climate as well.

The Arizona Corporation Commission, which regulates the state’s investor-owned utilities, recently refused to endorse plans by three power companies that included more natural-gas facilities. Commissioners directed them to make greater use of energy storage and plants that produce zero emissions.

“It’s very erratic what we’re now doing with power,” said Andrew M. Tobin, an Arizona commissioner who led efforts to block new gas plants. “I am so nervous that we will end up building a lot of capital plant that doesn’t stand the test of time.”

Some feel the push to get beyond natural gas may be too much, too soon. Officials at Arizona Public Service, the largest utility in the state, said they needed to include new natural-gas development as part of an overall mix, partly because of the state’s round-the-clock air-conditioning demands.

“Our needs are different than other utilities,” said Greg Bernosky, the utility’s director of state regulation and compliance. “We need resources that can have a long duration when our load is high, well after the sun has set. Natural gas resources provide that flexibility.”

Nationwide, other utility executives, power producers and federal regulators have also argued that a healthy power grid requires consistent power, even when the sun doesn’t shine or the wind ceases to blow. The more solar and wind power that is added to the electric grid, they say, the greater the need for reliable backup sources like natural gas.

“Gas has got to be part of that equation,” Robert F. Powelson, a commissioner on the Federal Energy Regulatory Commission, recently told an energy conference. “The gas system has gotten extremely reliable.”

And he argued that even recent advances in storage did not justify an overreliance on alternative energy, however inexpensive. “Storage is great,” said Mr. Powelson, a nominee of President Trump and a former chairman of the Pennsylvania Public Utility Commission. “But that is not a reliable long-term solution to the energy markets.”

Natural gas isn’t likely to be unseated as the country’s primary source of electricity generation anytime soon. In fact, utility companies plan to add more natural-gas plants than any other source, including all alternative energy sources, like solar, wind and hydropower, combined.
But the calculus is rapidly shifting as the prices of wind and solar power continue to fall.

According to the Department of Energy, power generated by natural gas declined 7.7 percent in 2017.

And the latest report by Lazard, the financial advisory and management firm, found that the cost of power from utility-scale solar farms was now on a par with natural-gas generation — and that wind farms were less expensive still.

Lazard calculated the unsubsidized cost of wind power at 3 cents a kilowatt-hour, while natural gas and solar energy were a little more than 4 cents. The typical American household pays 12.5 cents a kilowatt-hour for electricity, according to the United States Energy Information Administration. (The cost beyond generation reflects transmission, taxes, and other utility expenses and profits.)

Moreover, the market equation in the West is driven largely by California, the sixth-largest economy in the world, which has mandated that 50 percent of its power be generated from renewable sources by 2030. With a regional energy market run by the state’s electricity grid overseer, the California Independent System Operator, fossil-fuel plants have had increasing difficulty selling their power into a market with low-cost solar and wind power.

At the same time, state legislatures and regulators are increasingly demanding that utilities rethink how they manage their systems to reduce carbon emissions.

Some power producers have bristled at the mandates, even scaling back their operations in certain markets because, they said, it became too difficult to compete without losing money.
NRG Energy, for example, announced this month that it would close three natural-gas plants in California because of the regulatory push for clean energy.

After NRG’s announcement, Calpine, a power company based in Houston, said it would suspend plans to build a natural-gas plant in California.

“We cannot invest a single dollar in California,” Thad Hill, Calpine’s chief executive, said. “I would not call California a true competitive market.”

But a big Oregon utility, Portland General Electric, has embraced clean-energy mandates to ease it off dependence on fossil fuels.

“First off for us, climate change is real and we have to diversify our mix,” Dave Robertson, the company’s vice president for public policy. “We’re driving more and more toward a decarbonized future. We really feel like we’ve got to own that. It’s really where the science is taking us.”

This month, Portland General entered into an agreement to buy surplus hydropower from the Bonneville Power Administration — the surplus arises largely from California’s turn to other renewable sources — helping the utility avoid construction of natural-gas plants to replace a coal facility.

“There are surpluses of energy that are looking for markets,” said Brett Sims, Portland General’s director of strategic planning and resource strategy.

Portland General’s view offered a hopeful message to environmentalists, who pushed for the weaning off coal and now have done much the same with natural gas.

“It feels like déjà vu all over again for the electric sector,” Mike Brune, executive director of the Sierra Club, said. “Utilities began to find that coal was not just a dirty form of energy but a more expensive form of energy, so they began to replace coal. Now, as they’re looking to replace coal, they’re finding gas in the same situation. There’s a broad trend across the energy sector, mostly in the West, where coal and natural gas can’t compete.”

Mr. McCullough, the Portland energy economist and principal at McCullough Research, said that the rapid change had caught many in the industry by surprise and that it could lead to a shorter future for natural gas.

“I think the fact of the matter is we’re seeing a lot of people realizing that there are different ways to go,” Mr. McCullough said.