As forests burn, the carbon stored in those trees is lost. Funding and programs for soil sequestration are needed to achieve net negative emissions by pulling carbon from the atmosphere and storing it safely in soils– where it won’t go up in smoke.

The Climate Center’s Climate-Safe California Platform advocates for a formal California State commitment by 2022 to 80% below 1990 levels of greenhouse gas emissions and net negative emissions by 2030 for a climate-safe future.

The failure to consider consumption-based emissions such as the delivery of online purchasing ignores a significant portion of the greenhouse gases we emit out of the boundaries of the area being measured.

Let’s imagine it is April 2030. In the early 2020s, as the coronavirus pandemic swept the world, we in California finally addressed the climate crisis at the speed and scale science demanded.

Today, Earth Day 2030, we celebrate the deep systemic changes we have collectively made for a healthy, equitable, and climate-safe future. We reflect back on an exceptional ten years of climate action.

The decade began with a nightmare, COVID-19, which woke us up to the deadly consequences of ignoring science. We quickly realized that we must heed the warning of climate experts and take immediate, bold action to avert climate catastrophe.

It took an exponentially growing body of diverse advocates (like you!) putting pressure on policymakers to create bold change in line with the science. COVID-19 showed us how quickly and dramatically we could change government policies, unleash market forces, and create opportunities for everyone to participate in a climate-safe economy.

Today we look back on our many achievements, including:

Legislation enacted in the early 2020s is showing enormous benefits for health, the environment and the economy as the state halted all new investments in fossil fuel infrastructure and began rapidly phasing-out fossil fuel-powered cars, trucks, buses, trains, and equipment.

The state also enacted zero-emissions building codes and began phasing out methane gas. We are grateful to the workers whose livelihoods were dependent on fossil fuel industries for making this rapid transition to a 100% GHG-free, clean energy economy possible.

Ranchers, farmers, and public resource managers were incentivized to implement climate-friendly habitat and soil protection and restoration programs on millions of acres from the Sierras to the sea.

Legislation enacted in the early 2020s funded and supported California’s counties and cities to develop and implement clean, local, decentralized, resilient energy and storage, building independent capacity to address climate and other emergencies.

Millions of people took action to bring about the changes in policy that accelerated our transition.

On this Earth Day 2030, we commit to continuing our efforts to secure a healthy, vibrant, and equitable future for all.

We can achieve this vision if we act today based on the latest science. Support The Climate Center and help make Climate-Safe California a reality. Make every day Earth Day!

The World Health Organization (WHO) predicted that climate change could result in 250,000 deaths per year, and a new report in the New England Journal of Medicine suggests that number could be even higher.

The climate crisis is here now, worse than anticipated, and accelerating, threatening all life. California must step up its climate leadership to avoid increasingly dire consequences and inspire climate action worldwide. Endorse the Climate-Safe California Platform to enact policies that rapidly address the climate crisis.

A wide-ranging United Nations climate report shows that climate change is having a major effect on all aspects of the environment, as well as on the health and wellbeing of the global population.

The Climate Center’s Rapid Decarbonization Campaign sets a goal that by 2025, California will have enacted the bold, accelerated policies required by science to double emissions reductions, accelerate drawdown, and secure resilient communities by 2030.

See this excellent United Nations high level climate science synthesis (Sept 22 2019) of the latest from the advisory group to the UN Climate Action Summit. You can read the press release and summary here.  This is provides the scientific foundation for much more bold action in California– accelerated timelines and more aggressive policies to address the climate crisis.  -Ellie Cohen

Climate change is the defining challenge of our time. This important document by the United Nations and global partner organizations, prepared under the auspices of the Science Advisory Group of the Climate Action Summit, features the latest critical data and scientific findings on the climate crisis. It shows how our climate is already changing, and highlights the far-reaching and dangerous impacts that will unfold for generations to come. Science informs governments in their decision-making and commitments. I urge leaders to heed these facts, unite behind the science and take ambitious, urgent action to halt global heating and set a path towards a safer, more sustainable future for all. 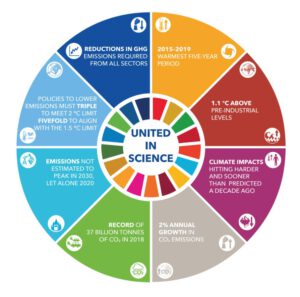 The Global Climate in 2015 – 2019
• Average global temperature for 2015-2019 is on track to be the warmest of any equivalent period on record. It is currently estimated to be 1.1°C above pre-industrial (1850-1900) times and 0.2°C warmer than 2011-2015
• Observations show that global mean sea level rise is accelerating and an overall increase of 26% in ocean acidity since the beginning of the industrial era

Global Fossil CO2 Emissions
• CO2 emissions from fossil fuel use continue to grow by over 1% annually and 2% in 2018 reaching a new high
• Growth of coal emissions resumed in 2017
• Despite extraordinary growth in renewable energy, fossil fuels still dominate the global energy system

Emissions Gap
• Global emissions are not estimated to peak by 2030, let alone by 2020
• Implementing current unconditional NDCs would lead to a global mean temperature rise between 2.9°C and 3.4°C by 2100 relative to pre-industrial levels, and continuing thereafter
• The current level of NDC ambition needs to be roughly tripled for emission reduction to be in line with the 2°C goal and increased fivefold for the 1.5°C goal. Technically it is still possible to bridge the gap

Intergovernmental Panel on Climate Change 2018 & 2019 Special Reports
• Limiting temperature to 1.5°C above pre-industrial levels would go hand-in-hand with reaching other world goals such as achieving sustainable development and eradicating poverty
• Climate change puts additional pressure on land and its ability to support and supply food, water, health and wellbeing. At the same time, agriculture, food production, and deforestation are major drivers of climate change

Climate Insights
• Growing climate impacts increase the risk of crossing critical tipping points
• There is a growing recognition that climate impacts are hitting harder and sooner than climate assessments indicated even a decade ago
• Meeting the Paris Agreement requires immediate and all-inclusive action encompassing deep decarbonisation complemented by ambitious policy measures, protection and enhancement of carbon sinks and biodiversity, and effort to remove CO2 from the atmosphere

This report has been compiled by the World Meteorological Organization under the auspices of the Science Advisory Group of the UN Climate Action Summit 2019, to bring together the latest climate science related updates from a group of key global partner organizations – The World Meteorological Organization (WMO), UN Environment (UNEP), Intergovernmental Panel on Climate Change (IPCC), Global Carbon Project, Future Earth, Earth League and the Global Framework for Climate Services (GFCS). The content of each chapter of this report is attributable to published information from the respective organizations. Overall content compilation of this material has been carried out by the World Meteorological Organization. This report is available electronically, together with more extended background reports and additional supporting material at: public.wmo.int/en/resources/united_in_science

Things take longer to happen than you think they will, but then they happen much faster than you thought they could.

The destructive impacts of the climate crisis are now following the trajectory of that economics maxim as horrors long predicted by scientists are becoming realities.
More destructive Category 5 hurricanes are developing, monster fires ignite and burn on every continent but Antarctica, ice is melting in large amounts there and in Greenland, and accelerating sea-level rise now threatens low-lying cities and island nations.