“When unions feel like they see their future in a clean economy, and they really have evidence at hand…they tend to be supportive, because most of them are not climate deniers…But like all of us, union members who fear their basic livelihood is going to get lost, they call up their elected leaders and say, ‘Hey, your job is to protect us.’”

On Tuesday House Democrats unveiled a package of more than 120 pieces of legislation that seek to drive a transition to net zero carbon emissions by 2050, and the plan ties climate action to racial justice. Some pundits are saying that the plan shows just how far progressives have pushed the climate conversation. Vox reporter David Roberts called it, “The most detailed and well-thought-out plan for addressing climate change that has ever been a part of US politics.”

The plan is very similar to the Green New Deal, but lacks a ban on fracking and other rapid fossil fuel phase-out measures that will be required to avoid already looming climate catastrophe.

The plan comes just as Ohio University has released a study revealing that the South Pole has been warming at more than three times the global average over the past 30 years. For climate scientists, the alarm bells are ringing on global tippings points that are beginning to unleash potentially irreversible damage.

The 547-page report calls for setting a price on carbon dioxide pollution, eliminating pollution from cars by 2035 and from power plants by 2040, and achieving net-zero greenhouse gas emissions by 2050.

The roadmap draws on information gathered in more than 100 hearings by Castor’s panel and other House committees. The plan also calls for massive jobs programs, investments in infrastructure, and tax credits to encourage more manufacturing of clean energy components domestically.

The plan is ambitious, and hopefully this agenda will also soon include a rapid phase-out of fossil fuels that is more in line with the current climate reality and the need for net-negative emissions by 2030.

California can help by setting our own targets in line with the latest science. Our Climate-Safe California platform outlines these targets and the bold policies needed to meet them. Endorse it today.

Marilyn A. Brown and Majid Ahmadi of the Georgia Institute of Technology modeled a $25 and $60 tax on each metric ton of carbon dioxide emitted by the U.S. energy system. The $25 tax resulted in more jobs, but substantially less emissions reductions (see charts below).

The Climate Center focuses on getting a price on carbon that reflects the actual cost of fossil fuels to our economy and environment and includes climate dividends. 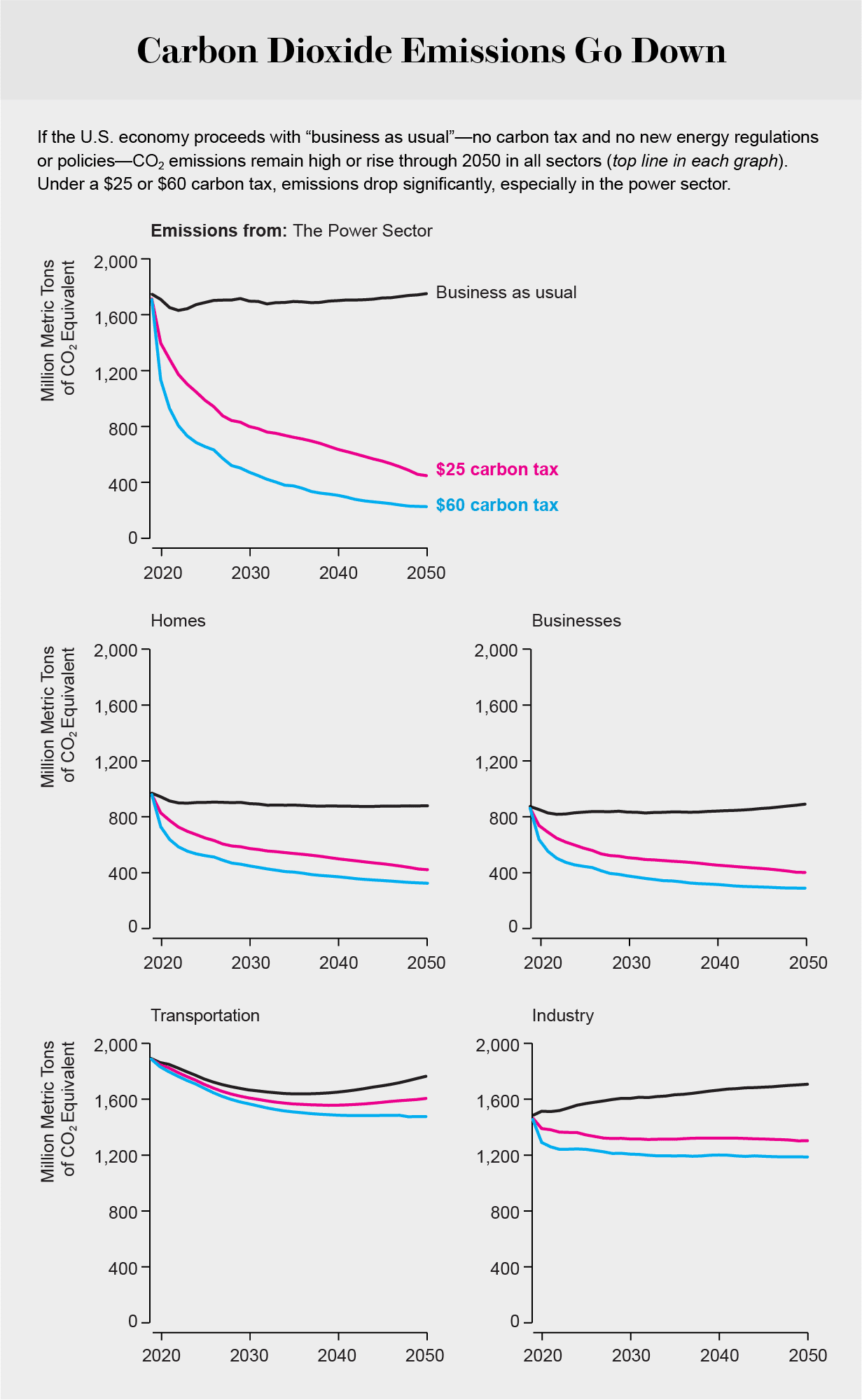 The European Union unveiled a sweeping set of environmental initiatives on Wednesday aimed at creating the world’s first carbon-neutral continent by 2050, touching everything from state aid rules to a green industrial policy and a carbon border tax on imports.

In its much-anticipated Green Deal for Europe, the new European Commission, led by Ursula von der Leyen, laid out 50 policies to be rolled out over the next three years that would revamp rules and regulations to meet ambitious climate goals.

With Democrats now in charge, two key committees in the U.S. House of Representatives used their first hearings of the year on Wednesday to press for more vigorous action on climate change, despite the political and practical hurdles.

Democrats and their witnesses, including governors, policy experts and scientists, argued that time is alarmingly short. But it became clear over the hours that if the stakes are high, the odds are long.

In the simultaneous hearings, the minority Republicans seized the moment to bash the so-called Green New Deal, a legislative platform that has been embraced by brash new Congress members as well as seasoned climate hawks. It seeks a rapid, wholesale transformation to a zero-carbon economy that would also be prosperous and equitable.

Some members of Congress are proposing a “Green New Deal” for the U.S. They say that a Green New Deal will produce jobs and strengthen America’s economy by accelerating the transition from fossil fuels to clean, renewable energy. The Deal would generate 100% of the nation’s electricity from clean, renewable sources within the next 10 years; upgrade the nation’s energy grid, buildings, and transportation infrastructure; increase energy efficiency; invest in green technology research and development; and provide training for jobs in the new green economy.

While the Green New Deal has been a fixture of the post-election news cycle, and at least 40 members of Congress (to date) have endorsed the idea, little is known about the American public’s support for or opposition to it. To inform this question, we surveyed a nationally-representative sample of registered voters in the United States.