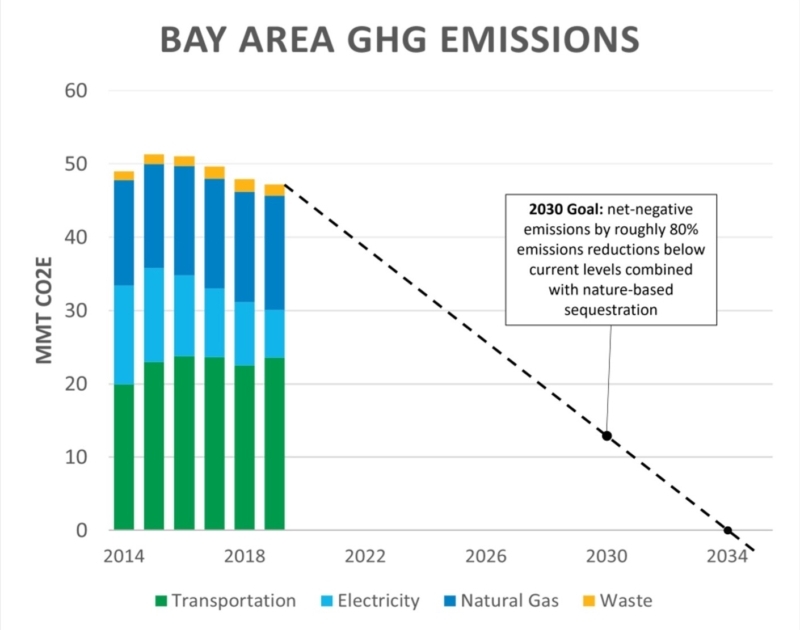 The Bay Area’s emission in four key sectors between 2014 and 2019. The dashed line indicates emissions reductions required by science for the region to do its part in the global effort to maintain a life-sustaining climate.

The San Francisco Bay area is home to almost 8 million Californians. The region consists of rural, urban, industrial, and suburban areas that represent a wide cross-section of California. The Climate Center conducted a report to determine greenhouse gas trends in the region in order to help policymakers determine challenges and opportunities for reducing emissions in line with the science. The report is the most up-to-date effort to evaluate the Bay Area’s climate progress and covers the nine Bay Area Counties: Alameda, Contra Costa, Marin, Napa, San Francisco, Sonoma, Solano, San Mateo, and Santa Clara.

This report confirms the need to address emissions through the suite of bold policies outlined in The Climate Center’s Climate-Safe California campaign.

The electricity sector showed the most significant progress, reducing its emissions by 52% in the report’s timeframe. This decarbonization is largely driven by the impacts of Community Choice agencies that have sprung up throughout the Bay Area.

Complicating the region and state’s climate goals is the increasing prevalence of large wildfires. According to the California Air Resources Board, the 2020 wildfire season produced an additional 110 million metric tons of carbon dioxide, more than a quarter of the state’s total emissions footprint.

Between 2014 and 2019, the Bay Area’s climate progress was slower than both California’s and the nation’s overall, which reduced emissions by 5.6% and 3.9% respectively. One reason for this is the relatively high level of economic activity in the Bay Area. Emissions tend to correspond to economic activity, and while California has shown that the two can be decoupled, stronger policies are needed to ensure the Bay Area reduces climate pollution in line with what science demands.

Instead of doing a comprehensive emissions inventory, The Climate Center used publicly available data and a replicable model to assess greenhouse gas trends that cover 70% to 90% of the region’s emissions.