The California Air Resources Board’s (CARB) updated Scoping Plan, the state’s five-year climate blueprint, will play a key role in determining the direction of California’s climate policy. California must lead the way with bold, accelerated, and equitable climate policies. With CARB’s December deadline looming, The Climate Center and our allies are urging the agency to:

The following testimony was given to CARB at an October 28 workshop by Baani Behniwal, Natural Carbon Sequestration Initiative Manager for The Climate Center:

Good afternoon, my name is Baani Behniwal with The Climate Center. While we are happy to see more ambition in the updated Scoping Plan, pursuant to recent legislation and the governor’s directive, we are frustrated and disappointed to see that CARB has doubled down on unproven carbon removal and carbon capture technologies, especially to the detriment of frontline communities, as powerfully stated earlier by Environmental Justice Advisory Committee (EJAC) member Connie Cho.

Carbon capture and storage (CCS) is wrongly categorized as a carbon removal strategy as it theoretically reduces direct emissions, or future emissions, rather than removing existing, or past, emissions from the atmosphere.

Therefore, we urge the agency to clearly distinguish CCS efforts from carbon removal goals because the two strategies address inherently different categories of emission types — the reduction of future emissions and the drawdown (or removal) of past emissions from the atmosphere.

As for direct air capture’s (DAC) role in achieving the carbon removal targets set out by the governor, the updated plan seeks to increase the capacity of DAC by 260 million times its current worldwide capacity by 2035. This is far-fetched and even dangerous if we rely so heavily on this nascent technology to get us to net neutrality and curb the climate crisis.

Lastly, while we’re happy to see some actions on natural and working lands carbon sequestration being ramped up, the crux of the problem is that many substantial carbon pools were admittedly not accounted for, so the conclusion that our lands will continue to be a net emitter is unfounded. We look forward to digging deeper into these gaps in the upcoming AB 1757 effort and folding those results into the Scoping Plan. 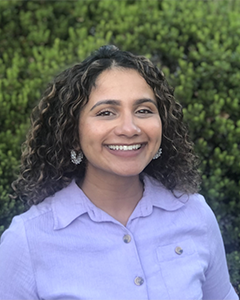 Baani joined The Climate Center in June of 2022 as the Natural Sequestration Initiative Manager. In this role, she leads the organization’s work on advancing nature-based carbon sequestration solutions to fight the climate crisis while protecting our natural lands and delivering a multitude of co-benefits for both the environment and affected communities.