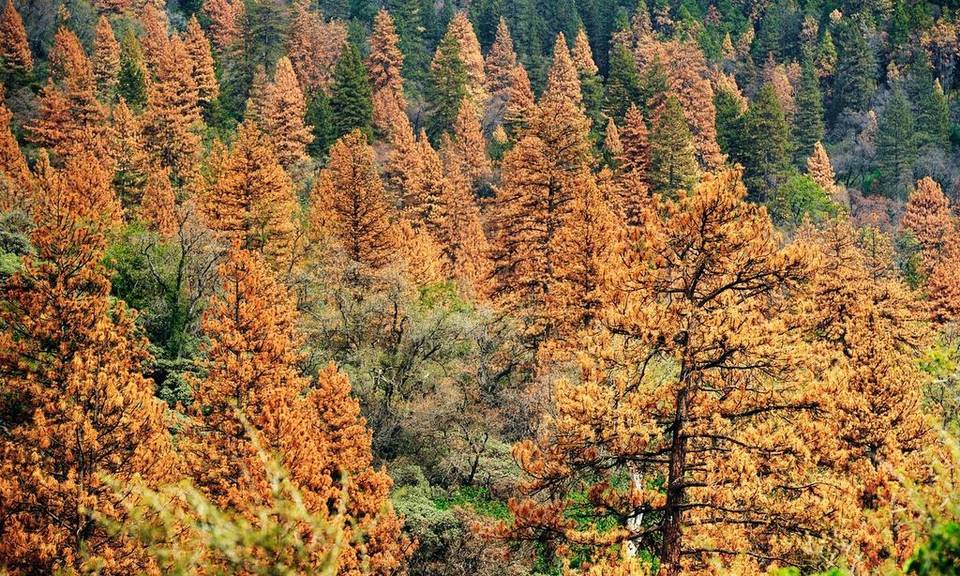 Many of us have our special place in nature that we turn to find peace, to remind ourselves of the profound beauty of our planet, or to connect ourselves to something larger – to a spiritual or emotional depth that we don’t find in our day-to-day lives. For me as a child it was a wild strawberry field near our home in Pennsylvania. As an adult, it is Yosemite.

Climate change doesn’t spare beauty or national treasures and Yosemite is no exception. I went to Yosemite recently for our annual June visit. This was my second spring vacation and my second failed attempt to take a little break from my daily work that revolves around addressing the climate crisis.

So far, El Capitan, Half Dome, Glacier Point, and all the other enormous chunks of granite seem to be doing just fine. The trees that frame these magnificent monoliths however, are another story.

It’s very obvious that something is not right long before you arrive in Yosemite Valley. My wife and I have been visiting the Sierra annually since 2003 and we’ve noticed changes in the past few years but this year is the worst we’ve seen. Traveling east on Highway 120 and climbing in elevation, we noticed thousands of dead brown trees intermixed with seemingly healthy green trees on many slopes. On some of the hillsides in the distance, it almost looked like a forest of autumn trees on the East Coast.

What I learned is that bark beetles, normally kept at bay by healthy trees filled with sap, are able to get the upper hand on the trees when they are weakened, dried, and stressed by prolonged drought. At least 29 million trees have been killed as the infestation and die-off continues unabated.

And that drought? Sure, droughts come and go, but recent studies assert that normal periodic droughts, and specifically this current California drought, are probably exacerbated by global climate change.

For example, this 2014 Stanford study found that “extreme atmospheric high pressure in this region – which is strongly linked to unusually low precipitation in California – is much more likely to occur today than prior to the human emission of greenhouse gases that began during the Industrial Revolution in the 1800s.”

And in this New York Times story reporting on a 2015 Columbia University study found that “global warming caused by human emissions has most likely intensified the drought in California by 15 to 20 percent.”

So what we are looking at, indirect though it may be, is a consequence of human-driven, geologically abrupt climate change.

Then there’s the wildfire threat that 29 million+ dead and dying pine trees pose to the region, as this Fresno Bee story alerts, potentially turning what had been millions of tons of sequestered carbon into yet another carbon burp.

Standing on a high rocky ledge overlooking the magnificent vistas in the Sierra can bring a tear of awe. This year it brought tears for other reasons, and reinforced my commitment to do my part in bringing down greenhouse gases to better stabilize the climate and safeguard our natural treasures around the globe.

Our strategic goal: By 2025, California will enact policies to accelerate equitable climate action, achieving net-negative emissions and resilient communities for all by 2030, catalyzing other states, the nation and the world to take climate action.
Bhutan on Your Bucket List?