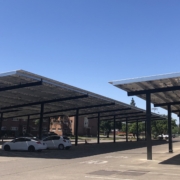 Solar carports are now shading eight parking lots at the University of the Pacific’s (UOP or “Pacific”) Stockton campus and anticipated to generate 30% of the university’s energy. The 5.3 megawatt (MW) project, which UOP worked with Tesla on, also includes 1 MW of battery storage and 16 electric vehicle charging ports.

This effort is a great example of the kinds of small-scale distributed generation projects Community Choice Aggregators (CCAs) across the state are investing in as collaborators, coordinators, and customers. CCA allows local governments to buy electricity at competitive rates on behalf of residents and businesses, while the investor-owned utility continues to provide delivery services. With the City of Stockton currently in the process of evaluating whether to establish or join a CCA, UOP’s solar project could be seen as a potential prelude to the local renewable energy development a future Community Choice agency could bring to the area. For more context, check out this list of both small- and utility-scale renewable energy projects CCAs have initiated in California.

Notably, UOP will be among the top 5 generators of energy from on-site solar PV in the nation, according to Sustainability Tracking, Assessment & Rating System reports.

The university estimates the new solar arrays will generate the electricity equivalent of removing over 1,000 cars from the road every year, provide the equivalent energy use for over 650 homes annually, and reduce over 5,000 metric tons of greenhouse gasses (GHGs) annually. That’s a sliver of what it’ll take to reach net-negative emissions by 2030 and secure climate-resilient communities, as called for in The Climate Center’s Climate-Safe California campaign, but every metric ton of GHGs we prevent from trapping heat in the atmosphere moves us closer to that goal.

As an added benefit, the widespread shade from the towering carports is already having a noticeable cooling effect that makes a stroll through the beautiful campus that much more enjoyable and keeps cars from baking in the sun. Stockton summers are already hot, and with the number of extreme heat days in the city expected to rise significantly throughout the century due to climate change, students, staff, and visitors will likely appreciate the shade.

“One of the unanticipated benefits is how positively everyone is responding to it,” says Jessica Bilecki, UOP’s sustainability director and project lead. “People are excited to see Pacific moving in this direction. It’s nice to have the visual showing the steps we are taking to reduce emissions.”

Pacific is currently drafting a sustainability plan to establish measurable goals for renewable energy procurement and energy conservation, according to Bilecki. The new solar structures will also provide experiential learning opportunities for students, who will have access to solar generation data for assessment.

A feasibility study released earlier this year found that a Stockton CCA could offer considerable job creation opportunities in renewable energy development and energy efficiency programs, both of which will be critical for mitigating climate change.

In forming or joining a CCA, Stockton would be taking the same steps that over 180 California cities and 20 counties already have. The state’s 24 CCAs have collectively invested in 6,000+ MW of new renewable energy infrastructure, creating thousands of construction jobs in the process. They’re now serving over 11 million customers with cleaner energy at rates competitive with or lower than the existing utility in their service areas.