On August 3, 2018, Stone Edge Farm unplugged from the grid, a celebratory moment for the team that made it possible. For supporters like us, the moment offers a glimpse into the future of energy.

To unplug, Stone Edge Farm got no permission or help from PG&E. Everything on the bustling 16-acre urban farm kept humming along uninterrupted, supplied by their own sources of energy. 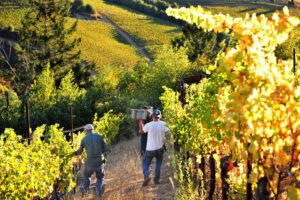 If Puerto Rico, with $3 billion already spent to deal with the longest blackout in U.S. history, had microgrids, much of the disruption in electricity service could have been avoided, according to expert Cathy Kunkel of the Institute for Energy Economics and Financial Analysis.

Microgrids are essential building blocks of the twenty-first century energy systems for at least three reasons, resilience, cost, and greenhouse gas reductions. Microgrids can “island,” meaning disconnect from the utility grid and supply electricity on their own without interruption when the utility grid breaks down.

Regarding resiliency, as reported previously by The Climate Center, the farm had its first big test in October 2017 when the wildfires knocked out power in the area. As the inferno ran rampant across Sonoma County, Craig Wooster, Stone Edge Farm’s engineer, flipped a few switches remotely, and the farm’s power stayed on for about ten hours while the rest of the area was in darkness. Imagine if hospitals, shelters and other emergency services had this capacity in the event of a natural disaster; it could be the difference between life and death.

As for cost, microgrids are increasingly competitive with the utility grid. A study led by Rocky Mountain Institute found that millions of customers will be able to cost-effectively depart from the grid. This represents billions of dollars in utility revenues. The threat to utilities of microgrids is real, not hypothetical.

Stone Edge Farm’s microgrid has the flexibility to operate in four different modes:

The California Public Utilities Commission, regulator of the state’s electricity system, is very concerned with the system’s stability, including the viability of PG&E and other investor-owned utilities. For this reason, the Commission imposes rules about unplugging from the grid as well as supplying power into the grid. Regulatory obstacles, primarily parts of Rule 21, prevent Stone Edge Farm from operating in the fourth mode described above.

According to Craig, Rule 21 is a quagmire. Craig asserts that instead of being a threat to grid stability, microgrids are a benefit to stability. Because of their onsite storage, microgrids can reduce their demand on the grid when peak load events occur.

The innovation propelling Stone Edge Farm’s microgrid is consistent with owner Mac McQuown’s way of doing business. As an inventor of financial instruments, he created one of the original S&P 500 index funds, and he helped reinvent the corporate bond.

Mac’s prime directive for the microgrid’s engineering team is to reduce the farm’s carbon footprint as far below zero as possible, and to establish a degree of energy independence. He enables the team to be unconstrained by money, protecting intellectual property rights (Everything is open source), and conventional thinking. As Craig Wooster said, “We don’t think outside the box; we get rid of the box.” This suits Craig whose passion is to do things as they’ve never been done before.

Another tenet underlying Stone Edge Farm’s microgrid is seeing failure as an inherent part of the process. Mac’s direction to Craig is, “You will not fear failure. It is the crucible of success. You will do some things twice and some things three times.”

As a self-declared anarchist, Mac believes in distributed control, and believes that serendipity is the generating function of the universe. Parallels with his philosophy and the Stone Edge Farm microgrid are clear.

Two fundamental design principles were described by Jorge Elizondo, an electrical engineer from MIT with a passion for sustainability who’s worked on Stone Edge Farm’s microgrid since 2015. The first principle is circularity that supports synergies among the parts, and creates resiliency so that if any part malfunctions, the system continues working. The second is modularity and decentralization which render flexibility to the system because components can be separated and recombined.

Mac’s highest aspirations for the microgrid is to demonstrate a way of thinking that breaks the norm.  For Jorge it is for the solutions developed at Stone Edge Farm to spread. And for Craig it is to inspire anyone thinking of developing a microgrid to not get hung up on planning; get started and take the journey. 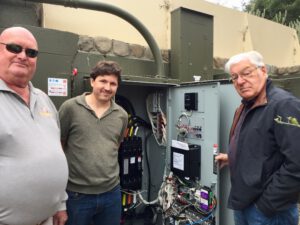 Author’s note: On October 16, 2018, Craig Wooster died unexpectedly. Craig leaves a legacy with his enormous contribution with microgrids to our renewable energy future. The photo at left is of the box containing the switch that connects and disconnects the microgrid and the larger grid, surrounded by Craig, Jorge, and Mac. It was taken Sept. 28, 2018.