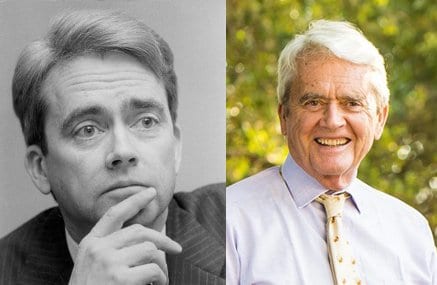 William K. Reilly, a Republican and one-time head of the Environmental Protection Agency (EPA), was recently interviewed by Christian Schwägerl of Yale e360.  Reilly is dismayed that a climate change skeptic has been named to lead his former agency, but he insists environmental progress can be made. Reilly, who was head of the EPA  under President George H.W. Bush, is opposed to Trump’s nomination of Oklahoma Attorney General Scott Pruitt to run the EPA.

In the interview Reilly discusses how Trump administration threats to cut funding for NASA climate change research represent a “reckless head-in-the-sand posture.” He also assesses how large states and other nations such as China can lead the climate battle, and urges EPA employees to stay and fight for the environment. “We need them now more than ever,” says Reilly.

While the interview is heartening in some ways, Reilly fails to highlight the role of the GOP in blatant climate denial. Trump is getting a lot of credit for his own climate denial and misguided policies and nominations while some Republican lawmakers quietly celebrate the incoming president’s energy agenda. We need look no further than the GOP’s official platform on energy and the environment to understand what is about to happen to energy and climate policy in all three branches of our government.

Here are a few key statements from the GOP platform on energy and the environment:

We support the opening of public lands and the outer continental shelf to exploration and responsible production, even if these resources will not be immediately developed…

…. Climate change is far from this nation’s most pressing national security issue. This is the triumph of extremism over common sense, and Congress must stop it.

We oppose any carbon tax. It would increase energy prices across the board, hitting hardest at the families who are already struggling to pay their bills in the Democrats’ no-growth economy. We urge the private sector to focus its resources on the development of carbon capture and sequestration technology still in its early stages here and overseas.

The environment is too important to be left to radical environmentalists. They are using yesterday’s tools to control a future they do not comprehend. The environmental establishment has become a self-serving elite, stuck in the mindset of the 1970s, subordinating the public’s consensus to the goals of the Democratic Party. Their approach is based on shoddy science, scare tactics, and centralized command-and-control regulation. Over the last eight years, the Administration has triggered an avalanche of regulation that wreaks havoc across our economy and yields minimal environmental benefits.

The central fact of any sensible environmental policy is that, year by year, the environment is improving. Our air and waterways are much healthier than they were a few decades ago. As a nation, we have drastically reduced pollution, mainstreamed recycling, educated the public, and avoided ecological degradation.

Opposing Trump’s energy policies is important, but opposing his firmly entrenched political allies is arguably even more important. Many pundits predict he will be impeached. Does the Vice President or the Speaker of the House put us in any better position from a climate standpoint? It could be even worse. At least Trump is an opportunist and if it’s to his advantage to fight climate change, he may do it. That might not be true for other GOP leaders who are more firmly rooted in the fossil fuel industry. Drawing attention to the men behind the man is key to this fight. Let’s not forget it.

Our strategic goal: By 2025, California will enact policies to accelerate equitable climate action, achieving net-negative emissions and resilient communities for all by 2030, catalyzing other states, the nation and the world to take climate action.
Standing out in the suburbs

Energy intensity down, U.S. economy up, and stranded assets as oil demand d...
Scroll to top