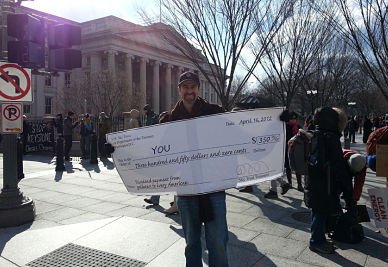 brought this big climate dividend check to the Forward on Climate Rally in Washington DC.  The “Big Div” shows how revenues from a carbon fee on upstream polluters can be returned back to households. A recent proposal by Senators Boxer and Sanders would include 60% of revenues returned as dividends. In 2009-10, Senators Cantwell and Collins proposed 75% of revenues as dividends. Scientist James Hansen and others are calling for 100% dividend.

More from the Climate Rally:

“Dark and cold we may be, but this
Is no winter now. The frozen misery
Of centuries breaks, cracks, begins to move; The thunder is the thunder of
the floes, The thaw, the flood, the upstart Spring.
Thank God our time is now when wrong
Comes up to face us everywhere,
Never to leave us till we take
The longest stride of soul we ever took.
Affairs are now soul size.”
-Christopher Fry, A Sleep of Prisoners

Rev. Lennox Yearwood, leader of the Hip Hop Caucus and the MC at yesterday’s
massive Forward on Climate rally in Washington, D.C., talks all the time
about this being the climate movement’s “lunch counter moment.” And, thank
God, it looks like he has been prophetic.

“Lunch counter moment” refers to the point in 1960 when the African-American
freedom movement took off. It did so when young black people all over the
South began sitting in at segregated public lunch counters, refusing to
leave until served. For these actions, they were beaten, spat upon, arrested
and more by white racists and racist power structures, but their courage and
nonviolent direct action galvanized a south-wide and then national movement
which, five years later, forced the federal government to pass a Civil
Rights Act and Voting Rights Act outlawing legal segregation.

Without this movement, Barack Obama would never have been President.
Much more importantly, without it we would not have seen the end of 1950’s
McCarthyism, the rise of a powerful anti-war movement, women’s movement,
environmental movement, lgbt movement and more.

The climate movement’s lunch counter moment: what was it about Feb. 17 in DC
which makes it realistically possible that history will record this action
as the launching pad for the “yes, we did,” massive popular movement which
literally pulled human society back from the cliff of looming, catastrophic
climate disruption?

Numbers: Size is sometimes important, and it definitely was yesterday.
All the main organizers expected tens of thousands, but I don’t think too
many expected 40,000 to 50,000. Especially given the incredibly cold
weather, this was a huge accomplishment for our movement.

Determination: It was really cold yesterday, with a wind chill that had to
be around 10 degrees at times when that wind whipped across the mall, and it
did so often. Yet the crowd kept growing all morning and into the early
afternoon, and virtually no one left. People could have said, after an hour
or two, well, this is important, and I’m glad I came, but I’ve got to get to
somewhere warm. IT DIDN’T HAPPEN. For four hours, from 12-4, for some
longer, we persevered and, indeed, we stood (and jumped) strong.

Unity: The Sierra Club is to be commended for their courage in calling for
this action right after the November election and for the resources which
they threw into it, as is 350.org, the Hip Hop Caucus and many of the 168
organizations that both formally supported it and worked hard to mobilize.
Despite tensions and differences, the coalition held together and, as a
result, yielded the powerful harvest of the day.

Geographic breadth: People were there from all over the country. Over
150 buses came from 30 states, some of them on the road for over 24 hours
one-way. And with the 20 or so solidarity rallies mainly in faraway locales,
this breadth was magnified.

Diverse Leadership: It was truly refreshing to have Rev. Yearwood MC this
rally, clearly in his element, to hear the powerful statements from the
Canadian First Nation leaders Chief Jacqueline Thomas and Crystal Lameman,
and Van Jones urging young people not to be “chumped,” to demand that Obama
follow through and get real both in word and action on climate. Although the
crowd did not have the full diversity needed, it is important that the
surging climate movement is supporting and bringing forward leadership
coming out of communities of color on this issue.

Not just the pipeline: The tar sands Keystone XL pipeline was the prime
issue that brought this effort together, but it was much more.
It was a vision of a future where our energy sources are clean, renewable
and democratically controlled by the people, not dirty fossil fuel,
corporate honchos. It is a vision which opposes all of the extreme energy
extraction industrial processes: mountaintop removal, oil drilling in the
Arctic ocean and in deep water offshore, fracking, as well as tar sands.
Everyone understands that victory on the pipeline is just the first step,
the turning point, towards what we urgently need.

Multi-tactical: Finally, it was striking to experience the activities which
took place in the week leading up to February 17. It began with a civil
disobedience action on Wednesday, close to 50 people locking themselves to
the White House fence, highlighted by Sierra Club leader Mike Brune taking
part, the first time in their 120-year history that they have done so. The
next day, with Bill McKibben and Mike Brune there to offer words of support,
US Senators Bernie Sanders and Barbara Boxer publicly announced their
introduction of a “gold standard’ fee-and-dividend bill that Boxer hopes
will go to the floor of the Senate this summer. And then came yesterday’s
massive demonstration.

The students who sat in at the lunch counters in February of 1960 and who
then formed the Student Nonviolent Coordinating Committee, SNCC, were clear
that to defeat segregation they would need to engage in essentially non-stop
organizing and action. Today’s climate movement must do the same, and more
need to figure out how they can do more on a personal level. We need to step
up nationally coordinated actions at the scale of the problem, this year,
this spring. “Affairs are now soul size.”

Our strategic goal: By 2025, California will enact policies to accelerate equitable climate action, achieving net-negative emissions and resilient communities for all by 2030, catalyzing other states, the nation and the world to take climate action.
Money from Cap & Trade is headed your way What California can teach D.C. about climate change policy
Scroll to top