A new report by The Climate Center examines the over procurement of power by private utilities in the context of the growth of Community Choice Energy in California. The report is authored by energy policy analyst June Brashares and Tyler Bonson, a graduate of Sonoma State’s Energy Management and Design and in Economics.

The rise of Community Choice

In the last three years, the rise of Community Choice Energy in California has been dramatic. The first Community Choice Agency (CCA), MCE Clean Energy, launched in 2010, and was the only one for four years until Sonoma Clean Power launched in 2014, followed soon after by Lancaster Choice Energy in 2015. By mid-2015 a critical mass of information-sharing and proof-of-concept had spread throughout California and by late 2016 nearly half the counties in the state and over 300 cities were either operational or at some stage of evaluation of Community Choice. The Climate Center keeps track of the growth with a dynamic interactive map, updated weekly, that includes Community Choice Energy status information about every city and county in the state at the Clean Power Exchange. The report takes it from there and projects the magnitude of the growth between now and 2020 in terms of megawatt-hours of load departing to Community Choice. 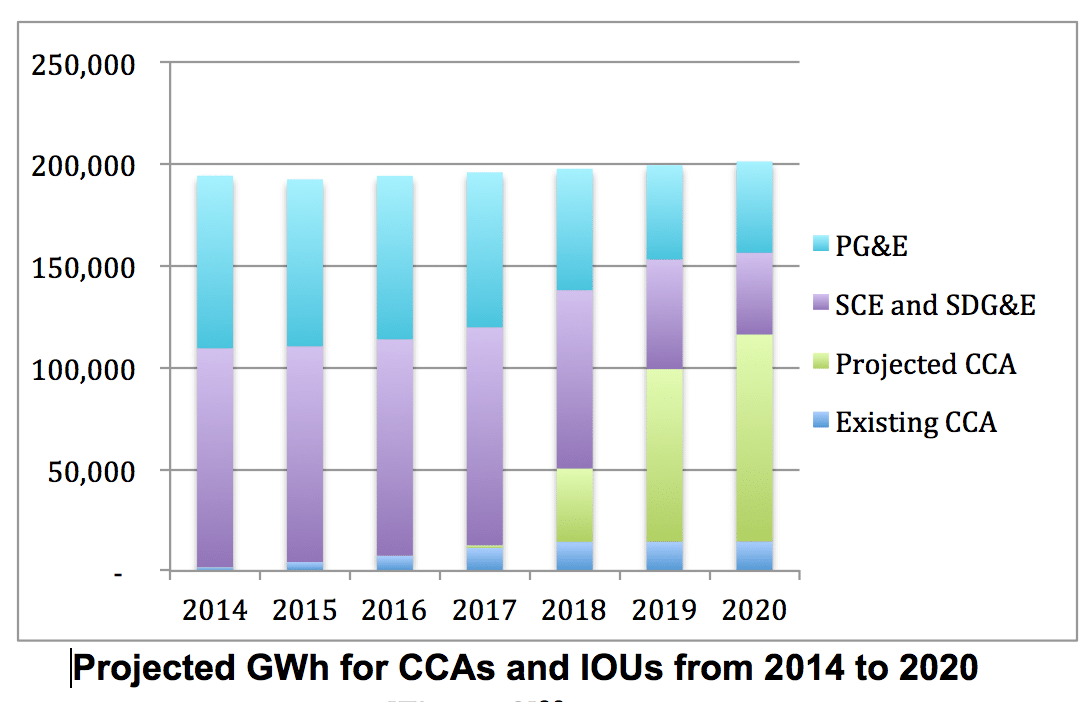 According to LA Times reporter Ivan Penn, who has covered the issue since February 2017: “California has a big — and growing — glut of power, an investigation by the Los Angeles Times has found. The state’s power plants are on track to be able to produce at least 21% more electricity than it needs by 2020, based on official estimates. And that doesn’t even count the soaring production of electricity by rooftop solar panels that has added to the surplus.” (Californians are paying billions for power they don’t need, LA Times, Ivan Penn and Ryan Menezes, Feb 5, 2017)

The new report has several key findings relating to both the exit fees and private utility procurement of power. They include:

The paper offers a series of recommendations including:

To download the entire report and appendices, click the following links: Community Choice Aggregation Expansion in California and its Relation to Investor Owned Utility Procurement with underpinning CCA/IOU Load Data Spreadsheet, prepared for The Climate Center by June Brashares and Tyler Bonson

If you would like to make a comment about exit fees to the California Public Utilities Commission, you can call, write, or email the CPUC Public Advisor at:

Our strategic goal: By 2025, California will enact policies to accelerate equitable climate action, achieving net-negative emissions and resilient communities for all by 2030, catalyzing other states, the nation and the world to take climate action.
Is the Exxon-backed Climate Leadership Council’s proposal worth the c...

Should you be cynical about CEO and politician claims to support climate ac...
Scroll to top