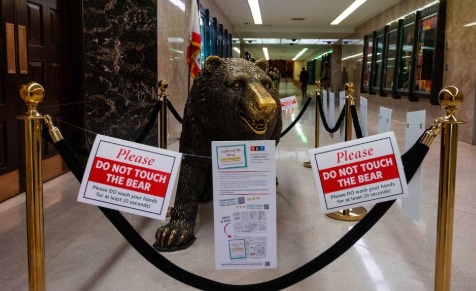 AB 345 (Muratsuchi) SUPPORT – This bill will, if enacted, establish regulations to protect public health and safety near oil and gas extraction facilities,  including a minimum setback distance between oil and gas activities and sensitive receptors such as schools, childcare facilities, playgrounds, residences, hospitals, and health clinics. See The Climate Center’s Letter of Support. STATUS: In the Senate. Read first time. Sent to the Senate Rules Committee for assignment to a policy committee.

AB 1839 (Bonta) WATCH – The “Green New Deal” bill. Introduced on January 6, this bill would create the California Green New Deal Council with a specified membership appointed by the Governor. The bill would require the California Green New Deal Council to submit a specified report to the Legislature no later than January 1, 2022. So far the plan is scant on specifics including how goals will be met or how much the State will pay to meet those goals. STATUS: Introduced in January 6. No committee assignment yet. The bill has not been scheduled for a hearing.  The Climate Center is still assessing the bill and has not yet taken a position.

AB 2145 (Ting) WATCH – This bill would state the intent of the legislature to enact legislation to reform the electric vehicle charging infrastructure approval process employed by the CPUC to help ensure that by 2030 California will safely install enough EV charging ports to meet the demand through public and private investment.

AB 2689 (Kalra) Likely Support. – This bill updates Investor-Owned Utility (IOU) confidentiality provisions to allow a broader range of market experts to participate in complex IOU cost recovery proceedings and supports California Public Utilities Commission (CPUC) oversight to protect customers from unreasonable or unjustified IOU rate increases. California IOU electric generation rates have increased 49% since 2013. Between 2008 and 2018, IOU customer rates doubled from $29.3 billion to $59.3 billion per year. AB 2689 would result in greater IOU accountability and improved consumer protection, safety, and affordability. The California Community Choice Association is a sponsor of this bill. STATUS: In the Assembly Rules Committee.
AB 2789 (Kamlager) WATCH – This bill would appropriate $1,500,000 and require the CPUC, in consultation with the CA Energy Commission, to request the California Council on Science and Technology to undertake and complete a study, as specified, relative to electrical grid outages and cost avoidance resulting from deployment of eligible renewable energy resources, battery storage systems, and demand response technologies. The bill would require the PUC to report the results of the study to the Legislature by January 1, 2022. STATUS: Awaiting a hearing in the Assembly Utilities and Energy Committee.
AB 3014 (Muratsuchi) WATCH – This bill aims to improve the reliability of California electric supply by reforming the State’s resource adequacy (RA) program. Specifically, this bill creates the Central Reliability Authority (CRA), a non-profit public benefit corporation, to purchase residual RA needed to meet state requirements while still allowing load-serving entities (LSEs), such as Community Choice Agencies (CCAs), to maintain their procurement autonomy. The newly created CRA also reduces costly RA purchases currently undertaken by the California Independent System Operator (CAISO) and greatly enhances the RA market. The California Community Choice Association is a sponsor of this bill. STATUS: In the Assembly Rules Committee.

AB 3021 (Ting) SUPPORT – This bill would appropriate $300,000,000 per fiscal year in the 2020–21, 2021–22, and 2022–23 fiscal years from the General Fund to the California Energy Commission to administer a program to provide resiliency grant funding and technical assistance to local educational agencies for the installation of energy storage systems. STATUS: Double-referred to Education and Natural Resources committees.

SB 378 (Wiener) WATCH – Would establish customer and local government protections related to Public Safety Power Shutoff (PSPS) incidents. Specifically, the bill requires IOUs to provide annual reports to the Wildfire Safety Division within the CPUC on the condition of their electrical equipment and provide maintenance logs to assess fire safety risk. The bill also requires the CPUC to develop procedures for consumers and local governments to recover costs from IOUs accrued during PSPS events, improves PSPS notification procedures, and makes IOUs subject to civil fines if the CPUC determines that the IOU failed to act in a reasonable and prudent manner. STATUS: In the Assembly, pending committee referral.

SB 774 (Stern) WATCH – SB 774 would require IOUs to collaborate with the State’s Office of Emergency of Services and others to identify where back-up electricity sources may provide increased electrical distribution grid resiliency and would allow the IOUs to file applications with the CPUC to invest in, and deploy, microgrids to increase resiliency. Concerns focus on too much control being placed in the hands of the IOUs over microgrid development when other LSEs and stakeholders can and should play a role. STATUS: In the Assembly committee process with no committee assignment and no hearing date.

SB 917 (Wiener) WATCH – This bill renames the California Consumer Energy and Conservation Financing Authority and via eminent domain takes control of PG&E to create the Northern California Energy Utility District and a public benefit corporation, Northern California Energy Utility Services, to carry out day to day operations. The key provision of the bill that is relevant to Community Choice Energy is: “10623: The authority of a community choice aggregator to provide electric service within the service territory of the district shall remain as if the district were an electrical corporation.” STATUS: Triple-referred to Senate Energy, Govt & Finance, and Judiciary Committees.
SB 947 (Dodd) SUPPORT – This bill would require the California Public Utilities Commission to evaluate financial performance-based incentives and performance-based metric tracking to identify mechanisms that may serve to better align electrical corporation operations, expenditures, and investments with public benefit goals. STATUS: In the Senate Energy & Utilities Committee.
SB 1215 (Stern) – SB 1215, the “California Emergency Services Act” establishes the Office of Emergency Services in the office of the Governor and provides that the office is responsible for the state’s emergency and disaster response services for natural, technological, or manmade disasters and emergencies. Creates a grant program for microgrids. STATUS: In Senate, double-referred to the Governmental Organization and Energy Committees.
SB 1240 (Skinner) SUPPORT – This bill would require the California Energy Commission, in consultation with the California Independent System Operator, to identify and evaluate options for transforming the electrical corporations’ (Investor Owned Utilities’) distribution grids into more open access platforms that would allow local governments and other third parties to participate more easily in grid activities, as provided. The bill would require the commission to update the identification and evaluation at least once every two years. The bill would require the commission, beginning January 1, 2022, and biennially thereafter, to submit to the Legislature a report on the identification and evaluation of options. The Climate Center is a sponsor of this bill. For more details, see Kurt Johnson’s blog about this bill. STATUS: In Senate – referred to Senate Energy Committee.
SB 1258 (Stern) WATCH – Titled the California Climate Technology and Infrastructure Financing Act, this bill would enact the California Climate Technology and Infrastructure Financing Act to require the California Infrastructure Bank (IBank), in consultation with specified agencies to administer the Climate Catalyst Revolving Fund, which the bill would establish to provide financial assistance to eligible climate catalyst projects. STATUS: In the Senate Business, Professions and Economic Development Committee.
SB 1314 (Dodd) SUPPORT – SB 1314, the Community Energy Resilience Act of 2020, would require the Strategic Growth Council to develop and implement a grant program for local governments to develop community energy resilience plans. The bill would set forth guiding principles for plan development, including equitable access to reliable energy, as provided, and integration with other existing local planning documents. The bill would require a plan to, among other things, ensure a reliable electricity supply is maintained at critical facilities and identify areas most likely to experience a loss of electrical service. The bill would require the council to establish a stakeholder review board to provide statewide oversight for purposes of the grant program. The bill would require a local government, as a condition of receiving grant funding, to submit its plan and a report of project expenditures to the stakeholder review board within six months of completing the plan. The bill would require the stakeholder review board to annually report specified information about the grant program to the Legislature. The Climate Center is a sponsor of this bill. For more details, see Kurt Johnson’s blog about this bill. STATUS: Double-referred to the Senate Energy and Natural Resources Committees.

A Hot Issue: Fresno’s Getting Warmer …But We Could Change That.

Our strategic goal: By 2025, California will enact policies to accelerate equitable climate action, achieving net-negative emissions and resilient communities for all by 2030, catalyzing other states, the nation and the world to take climate action.
New study reveals electric cars really are greener than fossil fuel vehicle...

Electrify everything, or aim for beneficial electrification?
Scroll to top