by Ann Hancock, Chief Strategist and Co-founder, The Climate Center

Imagine that we tackle the climate crisis in a way that actually turns things around fast.

Averting climate disaster depends on the climate movement becoming much more powerful and effective, and this depends on climate advocates and leaders aligning and collaborating around an overarching strategy.

The overarching strategy described below is the “how” that complements The Climate Center’s Climate-Safe California-Rapid Decarbonization Campaign, the “what.”

For years, The Climate Center has been developing an overarching strategy for climate action, also known as a theory of change. We’ve had hundreds of conversations with activists, strategists, and experts, and read thousands of articles on the topic.

We searched for other overarching strategies, and are surprised by how few exist. Some explanations we heard for this lack are:

Although these reasons are true to varying degrees, taking a broader view, we can see that the climate movement has countless approaches, many of which will have little impact on the crisis anytime soon.

With extremely limited time, attention, and money to avert climate catastrophe, we cannot afford to waste effort on approaches that are ineffective. We need to harness and focus our resources to reach the critical level that leads to massive impact.

A classic cartoon pokes fun at relying on faith and fuzzy thinking rather than an explicit, evidence-based approach to solve a problem. 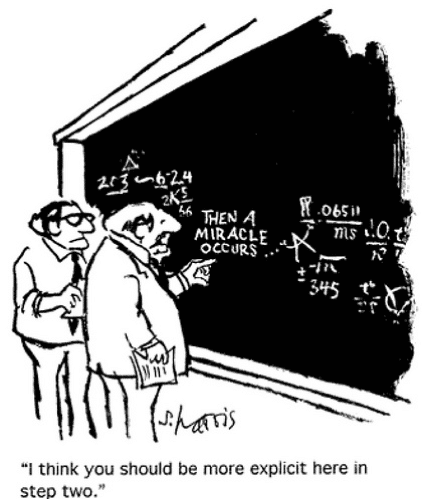 Using the following frame for an overarching climate strategy, we find general consensus that massive behavior change is needed to produce speed and scale GHG reduction to move toward our vision.

The overarching strategy developed by The Climate Center follows. The evidence and examples we’ve gathered, and the climate action veterans with whom we’ve shared this strategy have affirmed the validity of this model. 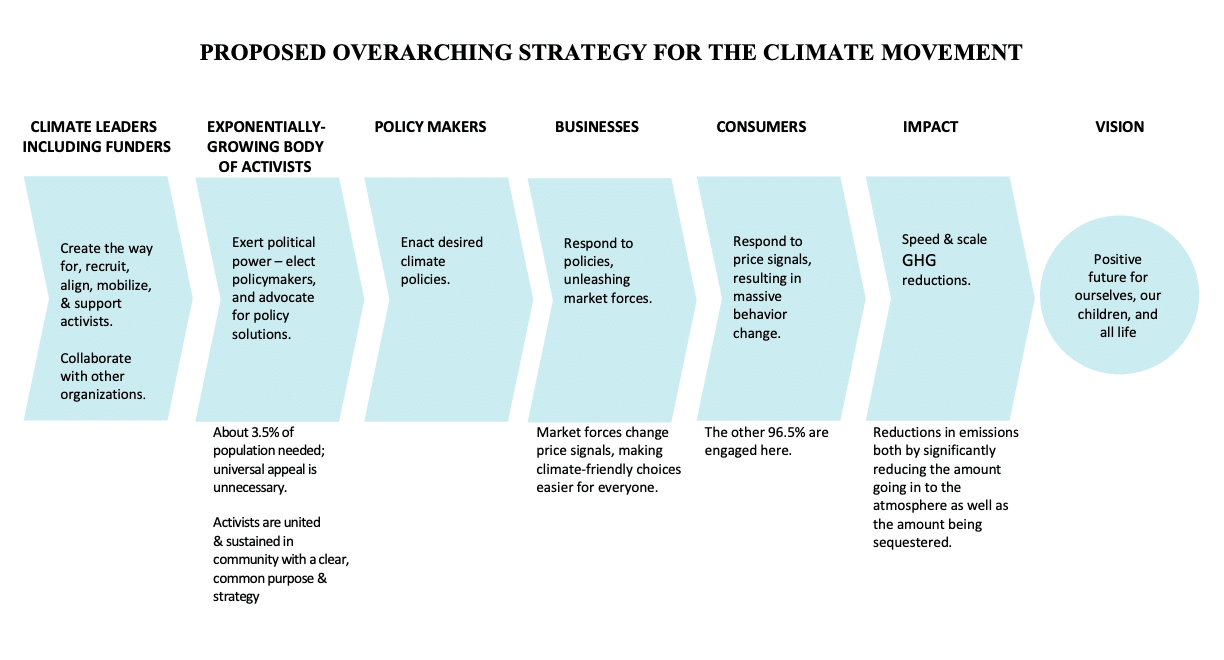 To ensure the accountability and effectiveness of the implementation of this model, a tracking system assesses results to provide feedback and adjustments.

Our overarching strategy focuses on policy which alters rules that govern the economy, energy, business, infrastructure, and transportation. To illustrate the importance of ensuring favorable policies, consider that in the U.S., businesses spent $3.4 billion on lobbying in 2018.

The energy for policy change and for electing representatives who vote for the desired policies comes from activists, whether local elected leaders, business people, scientists, academics, philanthropists, trade organizations, farmers, small or large groups of committed individuals, or coalitions.

Evidence from social movements shows that campaigns that achieved the active and sustained participation of just 3.5 percent of the population succeeded in their goals. Thus, a small, focused group can create the necessary conditions for change to occur in the larger group.

A persistent problem in the climate movement is that no core constituency with a concentrated interest in policy change exists. Increasing numbers of Americans are very worried about climate change, suggesting that a large latent force exists that is ready to be tapped and engaged in advocating for favorable climate policy.

Offering opportunities for engagement and clear policy items to support will attract and retain the large numbers who care about this issue. The more we grow, focus, and mobilize the 3.5 percent, the more we create a virtuous cycle, and the greater our impact. Convincing non-believers is unnecessary because the critical mass of 3.5 percent can be gathered without them. The remaining 96.5 percent are included at a later point in our overarching strategy.

This overarching strategy depends on climate advocates and leaders who initiate, guide, and support implementation of the strategy. Together we can inspire, recruit, focus, train, and sustain an exponentially-growing body of climate activists who can advocate for evermore powerful solutions. We can identify the policymakers and the policies to support. We can track results, make adjustments, and hold people accountable.

More about our overarching strategy here.

We welcome your comments, questions, and suggestions – toc@theclimatecenter.org

Ann Hancock
Ann Hancock is the Chief Strategist for The Climate Center. She co-founded the organization in 2001.

House Democrats’ climate plan is ambitious, but is it enough?

Democrats united behind a climate policy plan, but the timeline is based on old science

Harris and Ocasio-Cortez team up on a Climate ‘Equity’ Bill

Our strategic goal: By 2025, California will enact policies to accelerate equitable climate action, achieving net-negative emissions and resilient communities for all by 2030, catalyzing other states, the nation and the world to take climate action.
Brace for the deluge: Special interests are spending millions to get the California...