With the incoming administration, I expect to hear the same arguments pitting energy conservation against the economy, followed by a call to build more pipelines and drill. Next time you hear that argument, you can share this graph.

If we look at a state by state comparison from 2014, we get a pretty interesting picture: 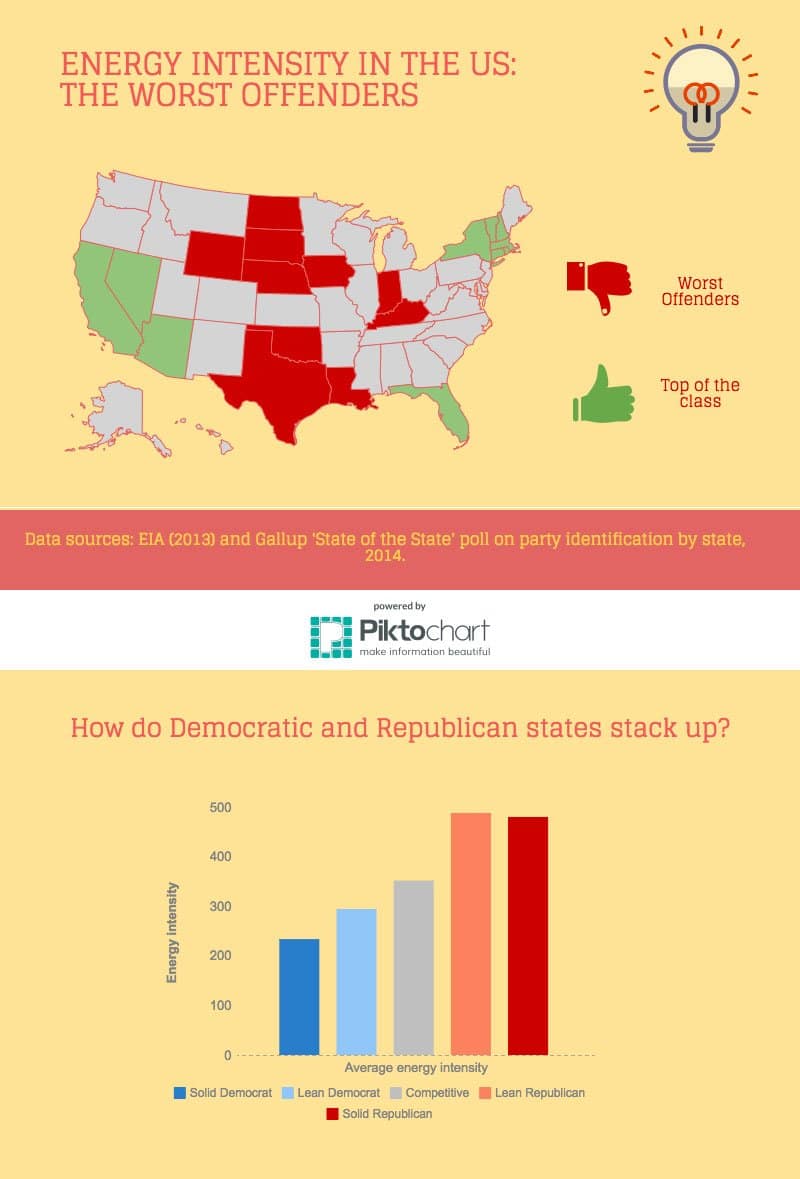 Because using energy costs money and energy intensity essentially indicates how much energy is being wasted (while a less intensive option is available), this is essentially a snapshot of which states are burning money. It’s highly ironic, given the Republican penchant for claiming to be fiscally responsible.

This trend is quite interesting given what has been happening with costly fossil fuel projects in the U.S. and Canada.

A recent article from Inside Climate News highlighted all of the pipeline projects being cancelled around the U.S. in part due to the competitive price of renewables. Furthermore, Canada’s oil (“tar”) sands, the world’s fourth-largest reserve of crude oil, have a very uncertain fate. They are also the world’s largest sources of climate pollution and America’s biggest source of imported oil. The future of the Canadian oil sands industry is uncertain because there is little confidence oil prices will rise high enough to keep the oil sands profitable. And, a flood of U.S. oil — one of the biggest reasons gasoline and crude oil have been cheap over the past two years — is plaguing Canada’s oil industry. Oil prices need to be above $80 per barrel for oil sands mining to be profitable. Today, oil prices hover around $52, and there’s little confidence they’ll rise much higher, despite Middle Eastern oil-producing countries’ recent agreement to cut their production to boost prices.* Simply put, demand for oil is dropping and the risk of stranded assets is rising.

Seventeen major oil sands projects were cancelled after oil prices crashed in 2014, as companies took major losses. Major investors in the oil sands have begun to leave, including Norway-based Statoil, which pulled out of the oil sands in December. When you look at the size of these operations and the destruction (pictured above), you get a sense of the potential for stranded assets and the enormous waste of money and resources as well. The expansion of the oil sands industry in Alberta has meant massive deforestation in Canada’s boreal forests, which store vast amounts of carbon. More than two million acres of boreal forest have been lost or degraded because of oil sands mining.*

It’s a sad story, but the good news is demand for oil is dropping. Perhaps the end of this devastation is in sight. Until it’s over, we can dispel the myths of energy conservation versus the economy and we can work to make the devastation in the Boreal forests and beyond rise in the public consciousness. I still have faith in humanity’s capacity to see such waste and devastation for what it is – immoral.

Our strategic goal: By 2025, California will enact policies to accelerate equitable climate action, achieving net-negative emissions and resilient communities for all by 2030, catalyzing other states, the nation and the world to take climate action.
Former Republican EPA Secretary discusses Trump’s climate denial, but not...