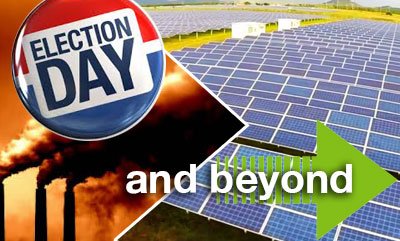 The election is just 13 days away and climate protection has barely been a topic on the national stage.  This year has been the hottest ever recorded, and yet we continue to pour carbon into the atmosphere because the price of fossil fuels do not reflect their true costs – yet.

Four times in the last month, the presidential candidates or their running mates have come together for nationally televised debates. Not once have they been asked about climate change. Billionaire environmentalist Tom Steyer, one of the most prominent donors to climate causes in the country, says that lack of attention to such a critical issue represents a “complete failure.”

These four debates, in fact, point to something larger that has been going on for much longer than this election season.  Political lobbying on climate change is an industry unto itself, and it’s one with deep pockets.  According to the Harvard Business Review, the U.S. Chamber of Commerce, the country’s largest lobbying organization, spent over $90 million lobbying against climate change legislation in 2014.

For comparison, the renewable energy lobby spent about $23 million in 2015.

So what can we do to mitigate the effects of a mammoth fossil fuel lobbying industry?  We can support organizations such as The Climate Center, that are promoting clean energy and climate protection at the local, state, and federal level.  From advocating for a price on carbon at the national level to incubating model programs such as Community Choice Energy at the local level, we know that we cannot relent while the fossil fuel industry continues to influence national policy.

After November 8th, fossil fuel lobbyists will continue to have the ear of our elected officials at the federal level and they must not be the only ones talking.  The Climate Center is committed to advocating for our climate and we will do so until the true price of carbon is reflected in its price.

How to make carbon pricing palatable to air travelers

Transform grief and outrage, but how?

https://www.flickr.com/photos/nucho/3210949168 Strongest US climate bill in 10 years has bi-partisan support

We Can Do More

Our strategic goal: By 2025, California will enact policies to accelerate equitable climate action, achieving net-negative emissions and resilient communities for all by 2030, catalyzing other states, the nation and the world to take climate action.
McKibben says there’s nothing radical about climate protection