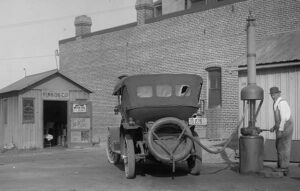 In the early days of the “horseless carriage,” if you wanted to purchase gasoline for your fancy new contraption, you went to a hardware store or blacksmith shop, where someone would fill up a 5-gallon container and pour it into your tank. Of course, in those early days of mechanized transportation, your car may have been electric, or even steam powered. But soon, purpose-built gas pumps were popping up on sidewalks in front of retail stores, and in 1913, the first dedicated gas station opened in Pittsburg, deploying pumps patented by one Sylvanius Freelove Bowser. It had a big first day, and sold 30 gallons of gas. The age of the internal combustion engine was upon us.

Today there are over 150,000 gas stations in the United States, each dispensing an average of 4,000 gallons per day. Gas stations have become a ubiquitous feature of the American landscape, with their red-white-and-blue chevrons, orange balls, and other distinctive signs looming over every highway and major road in our country. The only consumer product priced to the 9/10ths of a penny, we follow the price of gas obsessively.

However, the number of gas stations in the US has been dropping in the past decade or two, as cars become more fuel efficient, and we buy less gas per capita than in decades past. In the coming years we will likely see a rapid acceleration of this trend, as electric vehicles become a greater share of the national fleet. There are already about 200,000 electric cars and trucks in California alone, and by the end of 2015, the number of EVs in the US approached half a million. Those numbers will grow much more quickly as General Motors, Tesla and others roll out cars in the $30,000 price range that offer a 200-mile all electric range. This combination of affordability and long range has been identified as a crucial tipping point in EV adoption. As this shift from gas to electricity picks up steam, we can begin to glimpse a future “beyond gas stations.”

What will it mean when we simply charge up our cars in our garage, or while at work, in the same way we charge up our phones? The changes will be massive and dramatic. Replacing fueling with charging will offer greater convenience for drivers, and cleaner air for all. Reducing the number of gas stations will also dramatically change our urban and highway landscapes. Replacing space-intensive gas stations with rows of electric chargers at office parks, malls and shopping centers will free up massive amounts of real estate that can be redeveloped for other uses. Less gas stations will also be a boon to groundwater, as we will no longer be trickling gasoline and motor oil into our creeks, rivers and oceans. Less gas also means less Volatile Organic Compounds, less asthma, and healthier kids and families

There will always be ‘57 Chevys and ‘65 Mustangs that need gasoline, and the vintage car enthusiasts who want to maintain and drive them. But in the not-too-distant future, it is entirely possible that the owners of those classics will need to go to a specialty shop to purchase gasoline. Instead of using a phone app to find the nearest electric vehicle charger, maybe we will need to ask our phone “Dude, where’s my gas?” And maybe our phones will lead us back to the hardware store – or the blacksmith’s shop.

Our strategic goal: By 2025, California will enact policies to accelerate equitable climate action, achieving net-negative emissions and resilient communities for all by 2030, catalyzing other states, the nation and the world to take climate action.
Youth Provide a Voice for Climate Protection at BAAQMD

Youth Claim Their Voice in the Climate Movement
Scroll to top