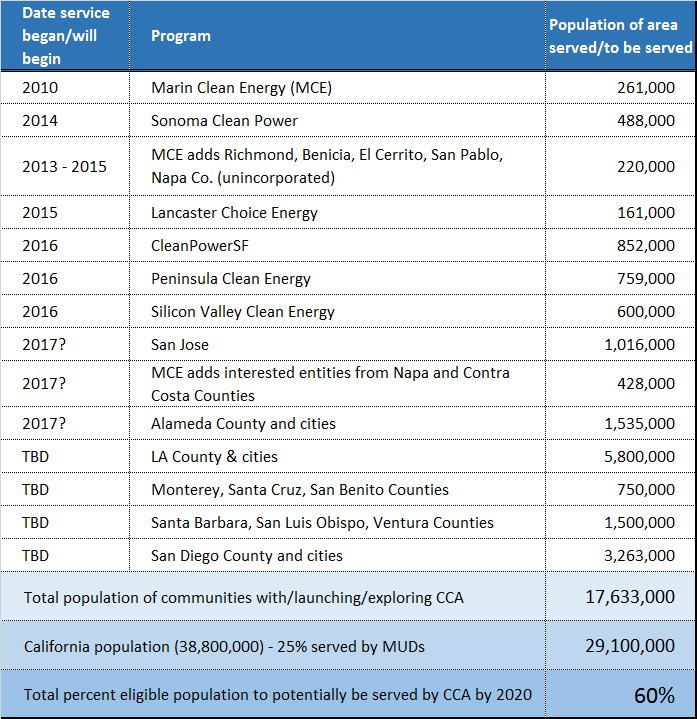 by Ann Hancock, The Climate Center

In October 2014, at our first Business of Local Energy Symposium, only two operational Community Choice programs existed in California: Marin Clean Energy and Sonoma Clean Power. A mere sixteen months later, Community Choice is taking off across the state.

We reported this story in our February 24, 2016 blog post called “The accelerating pace and growing number of Californians served by Community Choice.” For the March 4 Symposium we elaborated on this story.

From a climate protection perspective, the impact of this transformation is potentially huge. Consider the impact if results are similar to Sonoma Clean Power, for example, which in 2014 realized a 48 percent reduction in greenhouse gas emissions relative to PG&E’s last reported data from 2013.

In addition to the communities listed in the table above, many other California cities and counties are in varying stages of exploring Community Choice.

Last month, I was interviewed about Community Choice by two members of an international team studying emerging local energy solutions worldwide through the Enel Foundation. I asked the researchers how Community Choice compared with the other solutions they were studying. They responded, “Community Choice Energy is one of the most powerful solutions we have found.”

Community Choice is a platform for innovation where public/private partnerships build something that is both dynamic and enduring. It is up to us to bring the energy revolution home to our communities. That requires leadership and hard work.

Given the impacts of climate change, it is also our moral obligation to accelerate this trend, and leave our children and grandchildren a sustainable energy system that supports future prosperity.

Ann Hancock
Ann Hancock is the Chief Strategist for The Climate Center. She co-founded the organization in 2001.

Our strategic goal: By 2025, California will enact policies to accelerate equitable climate action, achieving net-negative emissions and resilient communities for all by 2030, catalyzing other states, the nation and the world to take climate action.
“Creating the Clean Energy Future” – Symposium inspires innovation and... Community Choice Energy: A California transformation in one decade
Scroll to top