Advancing Community Choice Energy one conversation at a time

My name is Davis Harper, and I am a writer, organizer, and advocate for the sustainable practices necessary to protect the planet’s most vulnerable communities. I’m very excited to be the newest member of The Climate Center team as the Community Outreach Specialist for Stockton and San Joaquin County. My role at The Climate Center focuses on encouraging the city and county to establish a Community Choice Energy agency (CCA) to serve residents and businesses in the city and county with cleaner electricity at competitive rates. About twenty CCAs operate in California, and it’s high time that our community begin to enjoy the benefits other communities are experiencing.

My appreciation for nature started from a young age, growing up in a small valley town an hour-and-a-half west of Yosemite National Park and the Stanislaus National Forest.

At the time, the deceptive calm of a quiet Sierra meadow or trickling creek felt untouched – a forever moment that had been and would always be. It wasn’t until much later that I would start to understand the many threats to these places, which often seem to be grounded in ideals of economic development.

I can still recite parts of the speech I gave on restoring the Hetch Hetchy Valley in one of my first college courses. The flooding of the valley in 1923 was the first issue for me that highlighted the dominant reckless attitudes we’ve exhibited toward the environment over the past century. Open grasslands? Graze them. Pine forests? Clear cut and send them off to a mill. More than a thousand acres of wetlands and serene meadows with towering Ponderosa pines, vibrant wildflowers, mule deer, black bears and more? Looks like an opportunity to funnel water to San Francisco.

With that speech, a seed had been planted.

The environmental impacts of mining and cattle ranching and the dislocation of indigenous inhabitants from national forests and parklands were likely not reflected in my Freshman presentation. This was before my time at the University of California, Santa Cruz, where terms like “political ecology” and “environmental justice” were integrated into my vocabulary. After earning my B.A. in Environmental Studies in 2018, I took a job at a local newspaper in the Sierra Nevada foothills, reporting on environmental issues and local government.

The work has helped me contextualize the concept that no issue lives in a vacuum, which makes careful reporting all the more important. Consider the intersection of wildfire protection strategies, forest restoration initiatives, logging interests, community power dynamics, climate change and, among members of the public, a general paranoia that their house will be the next to go up in flames come summer. With each stakeholder introduced to the mix, compromises across what appear to be a convoluted tangle of agendas start to emerge.

The experience has ingrained in me the principle that global change starts one conversation at a time. Concepts that seemed too “big” or “complicated” to have an opinion about were starting to occupy my daily Google searches. Talks with elected officials, passionate community organizers, off-the-grid recluses and business owners – all of whom landed across the spectrum on local and regional political issues – helped paint a picture in my mind of a divided community with so much potential for unity.

Everyone’s worth hearing out, and they’re worth protecting, too.

In Stockton, I spent the summer of 2019 collaborating with Rise Stockton – a coalition of nonprofits and the City – on the City’s Sustainable Neighborhood Plan, a long-term framework meant to inform the City Council on viable avenues for shifting to sustainable development practices. The emphasis is on carbon sequestration and emissions reductions in lower-income communities. Some efforts to achieve that include urban greening initiatives, walkable and bikable transportation planning and the promotion and organization of worker-owned cooperatives to sell fresh produce to local residents.

As we face climate change and its cascading consequences, it’s more imperative now than ever to practice historical and cross-cultural empathy – to share and hear the stories of those who came before us. That’s how we’ll build lasting partnerships with the diverse range of stakeholders necessary for meaningful climate action.

It’s not enough to only consider the soundbites of a global 1°C increase since the Industrial Revolution – upticks in severe droughts, wildfires, hurricanes, flooding, and other natural disasters. Equally crucial are the quantifiable, albeit, quieter injustices on each other and the planet that we’ve mined, fracked, clear cut and sprayed pesticides on for more than a century.

Lower-income communities in the City of Stockton and the Central Valley, in general, endure some of the worst air quality in the state.

We can’t let fears of changing marketplaces scare us away from breaking cycles we’ve known for decades to be impacting air, soil and water quality all over the world.

Advancing Community Choice Energy in Stockton and San Joaquin County will put power into the hands of community members to determine where their energy comes from and keep local dollars circulating in the local economy. It’ll take a commitment from the city and other community leaders to embrace Community Choice, and I hope to encourage those conversations and continue building momentum for this necessary transition.

I’m excited to grow, educate, and share positivity and hope in my work with The Climate Center and make some new friends along the way. 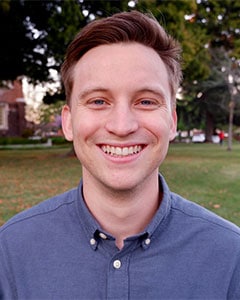