By MATT BROWN
THE PRESS DEMOCRAT

Dave Toister had been waiting at the Rohnert Park park-and-ride only for a few minutes when his colleague, Sam Amin, rolled up in a Toyota Prius.

Toister jumped into the passenger seat and, before Amin drove off, the carpool buddies repeated a daily ritual — they pulled out their smartphones and logged their route into an app called Carma.

The publicly funded program that matches drivers with people 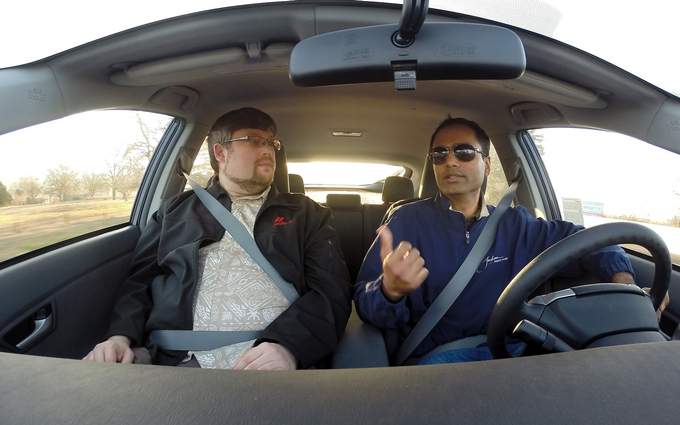 looking for rides is designed to get cars off the road and reduce traffic and air pollution.

Amin merged onto Highway 101 during the morning commute. Traffic already was starting to back up through downtown Santa Rosa, but Amin and Toister flew past in the carpool lane, chatting about the latest alternative fuel cars.

Less than 20 minutes later, they arrived at the Airport Business Center just south of Windsor, where they work in Kendall-Jackson’s information-technology department.

“Alone, it takes 45 minutes to an hour to get to work,” Amin said. “It’s much faster when we carpool. Plus, we can share the cost.”

The two have been carpooling together for a few years and decided to try using Carma in November.

Occasionally, they use the app to find rides at lunch time, but they say that there are not yet enough people on Carma — about 1,000 users are from Sonoma County — to be able to walk out the door and find a ride.

“There aren’t a ton of people on it,” Toister said. “That’s the only downside.”

Carma administrators hope to change that. On March 3, they will be rolling out an updated version of Carma that is simpler to use. The free app currently is available on Apple’s App Store, Google Play and here.

There are incentives to join — a $5 bonus for signing up, $10 for the first car trip, and $50 for 50 shared rides. Carma staff have been promoting the service at park-and-rides and local businesses.

Our strategic goal: By 2025, California will enact policies to accelerate equitable climate action, achieving net-negative emissions and resilient communities for all by 2030, catalyzing other states, the nation and the world to take climate action.
50,000 Californians Petition Regulators to Stand Strong for Rooftop Solar Take Action: Write the CPUC Opposing PG&E’s Proposal to Limit Favorable...
Scroll to top