People with solar panels on their roofs and their supporters teamed up with solar advocacy and environmental groups to deliver more than 50,000 signatures urging the California Public Utilities Commission (PUC) to not change the rules on existing solar customers. Specifically, the petition asks the PUC to allow customers to continue under current net metering rules for at least thirty years.

Jade Wong and David Levine, Bay Area residents with solar panels on their homes, helped submit the heavy stack of petition names at today’s meeting of the PUC. 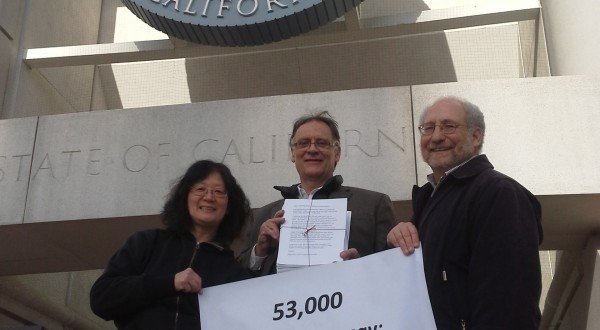 “The state created policies to encourage me to install solar panels on my home, and now they are talking about changing the rules,” said Levine. “I’m proud that my solar system will help reduce the need for expensive power plants and utility infrastructure to power my neighbors’ homes and businesses. I invested my own money in those panels and expect the investment to result in financial savings.”

Wong and Levine were joined by Jim Happ, CEO of Labcon, a laboratory supplies and equipment manufacturer that has been headquartered in the North Bay since 1959. An 800-kilowatt (kW) solar energy system Labcon installed in 2011 meets almost one-third of the company’s power needs. “My business is one of thousands throughout California that have invested in solar in order to show clean energy leadership and to manage our utility bills,” said Happ. “We made the decision to go solar based on state rules that we expected to remain consistent for the lifetime of our solar energy systems. I hope we can count on the Commission to uphold those rules.”

Net metering gives solar customers fair, full credit on their utility bills for the excess clean power they deliver to the grid for use nearby. In place in 43 states, this simple billing arrangement is one of the most important state policies clearing the way for individual investment in solar. In California, the successful program has supported the installation of nearly 200,000 solar energy systems on homes, schools, businesses, and public buildings.

Legislation passed last year requires the PUC to consider new net metering rules for customers that install systems after July 2017. Existing customers expected to be able to use the current net metering rules as long as their panels produce electricity. Those customers will be able to keep using the current rules for a period of time that the PUC will soon determine. Solar and environmental advocates are calling for 30 years or more, commensurate with the expected lifespan of solar energy systems, while utilities want to change the rules for these customers in 6-12 years. The PUC has a March 31 deadline to make a decision.

The petition comes after a wave of other communications on this issue from the public to the PUC. Letters have been submitted from agricultural groups, school officials, business associations, solar energy companies, and others.

The agricultural letter stated: “Investment decisions were based on the NEM program structure that is premised on the terms for net-metered energy that existed in statute at the time these investments were made. The suggestion that this basic understanding of the NEM agreement could now change for existing investments is unfathomable to the participants and must be quickly remedied by the Commission.”

“Fair is fair and a deal is a deal,” said Brad Heavner, Policy Director for the California Solar Energy Industries Association. “Customers were given certain expectations and the state needs to hold up its end of the bargain.”

Our strategic goal: By 2025, California will enact policies to accelerate equitable climate action, achieving net-negative emissions and resilient communities for all by 2030, catalyzing other states, the nation and the world to take climate action.
Thinking about Sea Level Rise Carma App Helps Foster Carpool Connections
Scroll to top